Vikas Bahl is going to direct the next film Goodbye, which is a touching story about love, loss, and family (Queen, Super 30). Ekta Kapoor and her sister Shoba Kapoor are the brains behind the movie’s production, which is being done under the Balaji Motion Pictures banner. In addition, Amit Trivedi (Kedarnath, Andhadhun) was responsible for composing the score, and the movie has a total running time of two hours and eleven minutes.

The focus of the film is the relationship between a father and his daughter, and it examines this dynamic against the backdrop of values and customs. 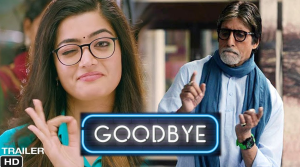 The story of Goodbye centers on the relationship between a father and daughter, who are often very different from one another in their outlooks, personalities, and behaviors. Their mother Gayatri, who is portrayed by Neena Gupta, is the only thing that can successfully keep them on a common ground. She is the only thing that can successfully bring them together. When Gayatri passes away, however, everything changes drastically because she takes the common thread of continuity with her.

While coming to terms with the loss, Gayatri’s family makes preparations for the rituals that will be performed at her funeral. Everyone arrives for the final rituals and ceremonies in their own individual state of frantic preparation. In the narrative, there is a son who has wed a foreigner and cares about her mother more than the rituals and ceremonies that are associated with the rites. His strange behaviors in the midst of the mourning setting frequently provide comedic relief, which is then followed by a reprimand from his father.

In addition to this, Rashmika Mandanna, who plays the role of Gayatri’s daughter, shares the same viewpoint as well. She is of the opinion that her mother ought to be granted the right to select the manner in which and the time at which she should say goodbye. In addition to this, her assertions are promptly refuted by her father, who is portrayed by Amitabh Bachchan.

Her father is of the opinion that the final rites and rituals are something precious that should not be interfered with in any way. According to him, it is not a birthday celebration where the participants get to determine the theme. Because of this, he desires a respectful and customary send-off for his wife before she embarks on her trip into eternal.

In the meantime, Sunil Grover (Boss, Bharat), who also has a prominent part in the movie, plays a pivotal part. In the movie, he portrays a self-proclaimed messenger of god who will control all of the rituals. Tara may have had a paradigm shift as a result of his character, and now understands the significance of culture and values more than she did before. along with the feelings that are associated with it.

The motion picture Goodbye is scheduled to begin its run in theaters on October 7th, 2022. During this time, you may also see the similarly touching film Queen, which was directed by Vikas Bahl and is available on Jio Cinema.

Vikas Bahl is the writer and director of the upcoming Indian Hindi-language family comedy-drama film Goodbye. The film will be in Hindi. Amitabh Bachchan, Rashmika Mandanna (in her Hindi film debut), and Neena Gupta star in the film, which was produced by Ekta Kapoor and Shobha Kapoor and co-produced by Bahl and Viraj Savant. Other cast members include Sunil Grover, Pavail Gulati, Ashish Vidyarthi, Elli AvrRam, Sahil Mehta, and Shivin Narang.

The production’s principal photography began in April of 2021. The date of the movie’s debut in theaters is set for October 7th, 2022.

The passing of a member of the family brings the remaining members closer together, helping them rediscover a connection that they had seemingly lost.

This is Ashish Vidyarthi.