Gautam Navlakha, a Delhi-based veteran journalist and author, is best known for his persistent and fierce criticism of India’s militarism towards its citizens in three broad areas – the northeastern States, Kashmir valley and the central Indian forest zone in Chhattisgarh. The People’s Union for Democratic Rights is a leading civil liberties and democratic rights defense organization in India. It works to defend, extend and implement the fundamental rights guaranteed by the Indian constitution. He is an internationally recognized public intellectual. He has been writing extensively in popular media since the 1970s and was a member the editorial and staff of India’s most prestigious academic publication, Economic and Political Weekly (EPW). He edited and produced his own issues of EPW Hindi (itled Saancha), in the 1980s. Each article by Gautam Navrakha is extremely well researched and historical. It challenges Indians to reflect and be vigilant about democracy. 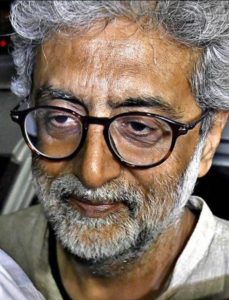 Gautam was taken into custody at his New Delhi residence on August 28th, 2018, during a raid. Unlawful Activities Prevention Act and Sections 153A-505, 117, 120, and 120 of the Indian Penal Code are all charges against Gautam. Along with other human rights defenders, he was taken into custody on the basis of purported evidence that they “involved in inciting violence” at Bhima Koregaon, near Pune, Maharashtra, 31 December 2017. As directed by the Supreme Court of India, the defenders were placed under house arrest. The Supreme Court of India questioned why the police had arrested the human rights defenders nine years after the incident. They pointed out that all the people involved are trustworthy citizens and that “stifling dissent” is detrimental to democracy. Gautam claimed that the government “protected the true culprits”, two prominent Hindutva and Hindu supremacist activists who are very close to the ruling system, for the violence at Bhima Koregaon. . He stated that his arrest was a “ploy to resist political dissent by a vindictive and cowardly state”.

The Delhi High Court released Gautam from house arrest on October 1, 2018. This quashed a local court order that granted transit remand to Maharashtra police for him to be transferred to Pune. Gautam expressed his support for human rights in his statement regarding his release from house arrest.

“I cannot forget my coaccused and the tens of thousands other political prisoners in India, who remain incarcerated because of their ideological convictions or on account of false accusations filed against them and/or wrongful convictions under Unlawful Activities Prevention Act – UAPA.

The court ordered that the police refrain from coercive actions against Gautam Navelkha Anand Teltumbde or Stan Swamy until November 21. This deadline was extended by one day following the request of Aruna Pai Kamath, Additional Public Prosecutor, to have an early hearing. The Bombay High Court stopped the police from capturing the three activists until December 21. Gautam was not allowed to be removed from the police chargesheet by the public prosecutor. He claimed that there was sufficient evidence against him. The court criticized the prosecution and requested that all relevant material be submitted by December 4, 2018. Now, the Supreme Court is handling the case.

Gautam Navlakha is most well-known for his tireless work in Kahsmir on human rights and for his consistent criticism of India’s militarized control of its citizens. In the EPW, Gautam criticized the 1958 draconian Armed Forces Special Powers Act. This Act was imposed on at most 131 of India’s 700+ districts. It covers at least 150,000,000 Indian citizens. Gautam also commented on the famous fast by Irom Sharmila (northeastern India) where the AFSPA was established in 1958 to end dissidence.

“To understand the significance and our response to the Armed Forces Special Powers Act (AFSPA) we need to comprehend the role played by the armed forces in the Indian Union in wars against suppression. My contention is that AFSPA should be opposed not only because it protects the Armed Forces of the Union, the AFU which is how the Indian Constitution defines the army, navy and central paramilitary force, but also because civil liberties and democratic right groups oppose the policy of military suppression of our own people. It is the Indian state’s policy to militarily suppress its own people that requires protection from prosecution for the military forces deployed to brutally restore the State’s authority which in turn legitimizes counter-violence.

Gautam is a true citizen of a democratic society, able to freely and openly discuss any conflict and not be afraid to do so without concern for his safety.

It’s not surprising that Gautam, in addition to the northeastern part of India which is currently reeling from the AFSPA is also a prominent critic of and observer of India’s other conflicted area – Kashmir. As a convenor of a report about the ‘punity of Indian armed forces’ displayed in Kashmir, he was also involved. The report, Alleged perpetrators: Stories about impunity in Jammu & Kashmir was published by the International Peoples’ Tribunal for Human Rights & Justice. Gautam makes the critical point that militarism has been prominent not only because of obvious gross violations by India’s state but also because it has seeped into Indian sociopolitical, cultural and religious life through the rise in Hindutva (Hindu supremacist ideology). Gautam challenged all Indians to think about how Kashmir is being portrayed in the media. “Those who blame Kashmiris as religious fanatics must first ask if the presence RSS at the Centre makes all us Hindutvadis.” [link]. Gautam was denied entry to Srinagar after two decades of activism for Kashmir. Under Section 144 of Code of Criminal Procedure, he was taken into custody. Navlakha’s analysis is based on long-lasting and extensive conversations with people on ground, including youth from Kashmir, who are looking for some ‘normalcy in their lives that they have never experienced.

Trust is a weakness in conflict situations. Truth becomes a casualty. The quest for justice is abandoned for impunity by the armed forces. “Development” leads to further militarisation, financial dependence, and more military involvement. The space for political resolution will then shrink. It is here that we must understand the unique character of the movement as well as militancy. It is a delusion to believe that the movement is managed or sponsored by Pakistan. It is a contribution to the Indian state, and a society that rejects Kashmir’s autonomy. This society believes that those who have suffered horrendously at the hands Indian state should not be rehabilitated. The propaganda of counter-insurgency is based on falsification, and Indian citizens should not be fooled.

Gautam’s writings and study of India’s third wide conflict zone, which is possibly the most striking example of both Navlakha and the Indian bourgeoisie stifling the state’s development policy’, deepen our understanding and appreciation of the conflict in south Chhattisgarh. He focuses his efforts on understanding the interactions of four actors. These include adivasi (indigenous peoples) who struggle against displacement from ancestral land, corporations with large investments in mining, and other extractive and development projects because of the high mineral and forest cover; the Indian state’s militarism, as well as a state-sponsored vigilante group (which was deemed illegal by the Indian Supreme Court); and the armed revolutionary groups known collectively as Maoists. Gautam presents a series of essays and a book titled “Days and Nights In the Heartland of Rebellion”. He provides a detailed analysis of the facts of left-wing extremism in the form of Maoists and other adivasis in the Bastar region of Chhattisgarh. He is not afraid to show political sympathy for Maoists but he also criticizes their mistakes and crimes.

These are all gathered together by him in one analysis. He argues, in keeping with his intellectual dissident status against the Indian government, that the Indian state’s campaign to label all adivasi villages as “Maoists”, is both strategic and willful.

This war is characterized by the vilification of such people who claim they are Maoists-linked. Counterinsurgency (COIN), however, has the primary goal of forcing ordinary people to stop supporting rebels. This is achieved by brute force and humiliation to weaken their resistance. To achieve this, rape, harassment, molestation and loot are all used. In fact, the first targets of government forces after an encounter/ambush are the villagers. They vent their frustrations on unarmed civilians.

The state-led unequal state development, exacerbated by the historical exclusion, marginalization and exploitation indigenous peoples, is the type of violence that triggers other forms of violence, culminating in counterinsurgent operations. His analysis is bold, nuanced, and neither condones nor condemns the Indian state’s repression of the Maoists. However, it also allows for a glimpse at structural violence.

This is Gautam Navlakha’s most significant contribution. It challenges all Indians to consider the complexity of Indian reality, the complicity and greed of the Indian government and big capital, and to look at the need for political and democratic, not military, resolutions to conflicts in India. It is not surprising that the Indian state wants to put him behind bars. Dissenters of the calibre of Navlakha can be hard to silence.

Gautam Navlakha, a civil liberties activist, was arrested in Delhi for his possible Maoist connection. He was brought before the Saket court, and will be taken into custody the Maharashtra Police.

Police have taken Navlakha’s bag, laptop, and some documents.

Pune Police had earlier obtained a transit remand for Gautam Navlakha until August 30. The Delhi High Court however has stayed the transit remand. Navlakha will be placed under house arrest until the case is heard.

Police raided the homes of prominent lawyers and activists in connection to an investigation into alleged Maoist involvement with Elgaar Parishad. This was a night event that took place in Pune on December 31, 2017.

Sources claim that speeches at Elgaar Parishad triggered the Bhima–Koregaon violence the next day. In June, police investigating the violence case claimed that Maoists plotted to assassinate Prime Minster Narendra Modi in an “Rajiv Gandhi-type attack.”

Navlakha was not the only one arrested by police after multiple raids in five states.P Varavara Rao and Sudha Bhardwaj, along with their daughter Anu Bhardwaj were also arrested on suspicion of being Maoists. Eight locations were raided in Maharashtra and Goa, Telangana Telangana Delhi, Jharkhand.

Some facts about Gautam Navrakha