“Drifting Home,” an anime movie that was produced by Studio Colorido and distributed by Netflix, is a fantasy adventure film. The film directed by Hiroyasu Ishida follows a group of sixth-graders as they try to investigate a decades-old apartment complex that will soon be demolished and has sentimental value to them, but they mysteriously end up falling through a crack in the space-time continuum. The film also follows what happens after they fall through the crack. These children, who have been abandoned in the middle of nowhere with little access to food or water, are forced to fight for their lives while also coming to terms with the harsh facts of life.

If you found yourself on the edge of your seat throughout this gripping survival drama that centers on ideas such as betrayal and love, then we have a few recommendations that you might appreciate. The majority of these anime that are comparable to “Drifting Home” are available to watch on streaming services such as Netflix, Hulu, Amazon Prime, Crunchyroll, and Funimation. 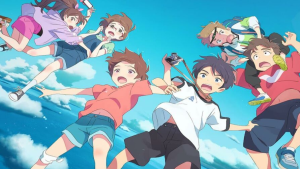 The film ‘Big Fish & Begonia’ is a mystical adventure film that, like Netflix’s ‘Drifting Home,’ focuses on the themes of death, love, and other complicated emotions. The plot of the movie revolves around a little girl named Chun, who is one of the numerous spirit-like beings that live in the old legendary world. She is the one who is responsible for regulating the genuine order of the human world. When she is on the verge of reaching adulthood, she takes a trip to the mortal world so that she might gain first-hand knowledge of it. Unfortunately, her trip comes to a tragic conclusion when a youngster who was attempting to save her loses his life in the process. She makes the decision to give up a few years of her own life in exchange for the boy’s revival, but she is completely oblivious to the far-reaching effects that her actions would have on the world.

Hal Film Maker’s ‘Tamayura’ is a slice-of-life drama anime that focuses on the life of Fuu “Potte” Sawatari, a high school student who uses her camera as a source of cathartic meditations on loss and grief, in the hope that she can turn it into something positive. The story follows Fuu as she attempts to turn her grief and loss into something positive. Fuu makes an effort to relive happy times through photography, just like Natsume did when she would go to her grandfather Yasuji’s room to think back on the past. Even while “Tamayura” does not contain any supernatural components, it is nevertheless an emotionally touching reflection on coping with a personal loss, which is also a significant theme in “Drifting Home.”

‘Bubble’ is a post-apocalyptic anime movie that centers on the metropolis of Tokyo after it is engulfed by a large bubble as a result of a massive explosion. The film was produced by Wit Studio. In the years that follow, the city’s inhabitants are expelled without their will since it is gradually submerged in a gravity-defying sea. Despite this, a number of orphans begin engaging in parkour team bouts throughout the desolate zone. By traveling to the epicenter of the explosion, one of these adolescents is attempting to solve the riddle of the bubble phenomenon that radically altered Tokyo.

Despite the fact that he is unsuccessful, he winds up meeting a mystery girl named Uta, who winds up transforming his life irrevocably. Similar to ‘Drifting Home,’ the film directed by Tetsuro Araki makes use of a natural occurrence that defies explanation in order to delve deeper into the inner agony that its primary characters are experiencing. Therefore, individuals who like the former will most likely take pleasure in the latter.

The fantasy anime film ‘A Letter to Momo’ is similar to the Netflix original ‘Drifting Home’ in that it deals with the topics of bereavement and loss and uses supernatural occurrences as a primary component of its plot. Momo Miyaura is a young girl of 11 years old who relocates to a distant island in the Seto Inland Sea after the sudden passing of her father. In spite of her best efforts to bring her life back to some kind of normalcy, she keeps having bizarre and unplanned run-ins with otherworldly beings. Although such strange occurrences first make her life more difficult, just as Natsume and Kousuke struggled while they were stranded in the sea, in the end, they assist her in coming to grips with the loss in her life and finding meaning in it.

Another stunning work of art, “Okko’s Inn” is a film directed by Kitaro Kosaka that deftly employs supernatural entities and occurrences as a frame through which to tell a story about overcoming grief and discovering the purpose of one’s life. The story follows the titular protagonist, whose parents were killed in a terrible car accident, and as a result, she is forced to live at her grandmother’s traditional hot springs inn after being forced to move there by her grandmother. It has come to light that the inn, much like the apartment complex in the movie “Drifting Home,” is inhabited by ghosts. Okko receives the same kind of emotional support from the ghosts who dwell in the village and at the inn that Natsume and Kousuke receive from Noppo, who plays a pivotal role in assisting them.

Chihiro Ogino, a young girl of ten years old, finds herself transported into the spirit world without her knowledge in the film “Spirited Away,” which is consistently ranked as one of the best anime movies of all time. Chihiro is going to need a lot of courage as she begins to explore the alien realm because she is going to run with magical beings, and she is going to have no choice but to coexist with them. After rescuing her parents, Chihiro, along with Natsume, Kousuke, and their other companions, finds themselves helplessly separated at sea and forced to battle for their lives. Chihiro, too, wants nothing more than to make it back to her own country without incident. Fans of anime will most likely take pleasure in the two movies because they tell an exciting story about going on an adventure and finding out more about oneself with the usage of supernatural occurrences.

Similar to Takana Shirai’s ‘Drifting Home,’ ‘Child of Kamiari Month’ is a supernatural fantasy anime film directed by Shirai that focuses on a variety of topics like love and sorrow. The main character of the movie is a little boy named Kanna Hayama who is attempting to cope with the sudden loss of his mother. Kanna discovers that she is a descendant of the gods, who are responsible for gathering offerings from various deities and bringing them to Izumo at the yearly Kamiari Festival. This information comes to her even though she has just about gotten over what happened to her.

After the passing of her mother, she is entrusted with the burden of carrying out her duties as an Idaten. In the film, we learn about Kanna’s inner struggle, which is extremely comparable to that of Natsume and Kousuke, who are also struggling to accept the loss of a loved one.

Where is Survivor Lauren Kanarek Now?