Dolly Singh is a well-known fashion blogger, content developer, and influencer on social media. She is most known for her role as ‘Raju ki mummy’ in the YouTube series ‘Raju ki mummy talk show.’ She was born in Nainital, Uttarakhand, on September 23, 1993. 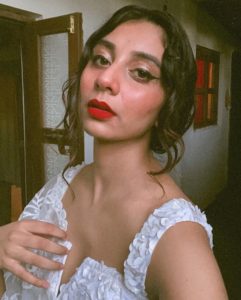 Dolly Singh is a social media sensation who has wowed fans with her hilarious vines videos and fashion trends. She is also a well-known content creator for iDiva and has her own YouTube channel. Dolly Singh hails from a low-income family. Dolly also posted a video to her YouTube page called ‘My Real House Tour,’ in which she shows off her parents’ Nainital home. The video is completely unedited and was well received by her admirers for displaying realism.

Dolly had a difficult upbringing. She didn’t have much money and couldn’t afford toys because she lived in a small place. She said in an Instagram post that her parents would work all day in their gift business, Apna Baazar, while she looked after her brother at home.

Dolly graduated from Kirori Mal College, University of Delhi, with a B.A. (Hons) in Political Science. She graduated from the National Institute of Fashion Technology in Delhi with a master’s degree in fashion management.

Dolly took a gap year after graduating from Kirori Mal College to take the CAT exam, which is a standard MBA entrance exam. She moved on to take the NIFT exam because she couldn’t taste victory in the CAT. She not only passed the exam, but she also received an all-India rank of 3 and was accepted into the National Institute of Fashion Technology in Delhi, where she completed her master’s degree in fashion management.

Her father, mother, and brother, Anmol Singh, make up Dolly’s family. Dolly is currently dating Manu Chaturvedi, a lawyer who works on his own.

Dolly established her fashion blog, ‘Spill The Sass,’ while working on her master’s degree. She used social media to share photos and define new fashion trends. She made films about wardrobe hacks, accessory and garment buying, budgeted styling, and so on. Dolly Singh interned with ‘iDiva,’ an online platform for Indian women that offers style and beauty recommendations, love counselling, entertainment news, and celebrity gossip, as part of her graduation project.

Who Is Jay Toomoth? Know About The Cast Of Pirate Gold of Adak Island