Keyshia Cole and Antonio Brown are causing a stir on the internet when photographs of Keyshia’s Antonia tattoo were made public.

Cole began her career when she was 12 years old, meeting MC Hammer and then rapper Tupac Shakur. Cole relocated to Los Angeles at the age of 15 and went on to sign with A&M Records.

After A&M collapsed, Cole’s second album, Just Like You (2007), was released under Geffen Records and debuted at number two on the Billboard 200. 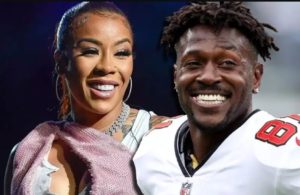 A woman dancing with the letters ‘AB’ tattooed on her lower back featured in a now-deleted video on Antonio Brown’s Instagram account.

Antonio Brown and Keyshia Cole are no longer together

“You Ain’t Pimpin Until You Hit An RnB Diva,” the caption for the photo reads, according to E Online. Because of the “RnB Diva” comment, fans concluded the woman with the Brown tattoo was Keyshia Cole.

At this time, it’s unknown if the woman in the video with the ‘AB’ back tattoo is Cole.

Cole is said to have fired shots at Brown in a now-deleted Instagram post following Brown’s video and all the speculation that followed, according to The Shade Room.

After photographs and video of Keyshia’s tattoo became popular on the internet, Antonio Brown reportedly dumped her.

According to that posting, the two were dating, and their relationship has ended. On their Instagram account, The Shade Room posted a screenshot of the singer and reality star’s Instagram Live.

Many people suspected the two were dating, although neither party has confirmed it. Brown has now responded to Cole’s recent postings on social media.

Unfortunately for Keyshia, AB has no interest in her in the short or long term. Brown claimed in a video that she should quit drinking because he is a player who does not want her.

Antonio Brown and Keyshia Cole had dated before

Before their disagreement, Antonio Brown and Keyshia Cole were merely rumored to be dating and in a relationship. They’ve recently forged an unexpected musical collaboration.

Brown played with the Tampa Bay Buccaneers of the National Football League until January 2022. After an incident in which the Wide Reciever abandoned the field of play in the middle of a game, he was discharged.

Since then, the 33-year-old has fully focused on his music career, releasing an entire album. There, he met R&B singer Keyshia Cole.

They collaborated on ‘Don’t Leave,’ the lead single from his new album, ‘Paradigm.’ Following an alleged Instagram post by Brown, things went south for the couple.

Brown allegedly made a provocative Instagram picture this weekend, and things appeared to be going south. While this feud continues, it appears that Cole and Brown will be without new music for some time.