Heather is the object of Cris Pannullo’s affections. He has been in a committed relationship with his partner for the past ten years.

After a break of one month, Jeopardy! has resumed airing the 39th season of the game show. Because of the Second Chance Tournament and the Tournament of Champions, the most recent season was suspended for a break.

Cris Pannullo emerged as the victor in the show that took place before the break. And despite the fact that the season is progressing, he has not yet lost his game. He had won 11 games when the show previously went on hiatus, and he defeated Mike Elliot on the day the show returned to television on Tuesday.

The audience is becoming increasingly curious about the secret of his success as he maintains his winning run. He attributes his participation in Jeopardy to his girlfriend, who not only persuaded him to play but also assisted him in coaching for each game. 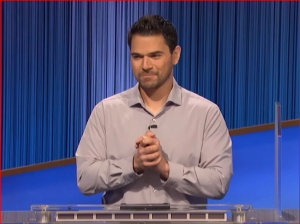 The contestant on Jeopardy known as Cris Pannullo has a girlfriend named Heather. They have been a couple for the past ten years.

According to him, she was the one who convinced him to submit his application for Jeopardy! According to TV Insider, he mentioned in the episode that aired on October 6 that Heather assisted him in coaching for each game, and he went on to describe her as a wonderful coach, a great partner, and a beautiful human being. In addition, he disclosed that Heather helped him in coaching for each game.

In a similar vein, he revealed on the show that aired on October 10 that they also have a lovable pet. Around ten years ago, his girlfriend saw a rabbit hopping in their front yard. Ever since that time, they have been living “at the mercy of a bunny named Lentils,” according to Cris, who was also involved in the conversation.

Because he even exploited Heather’s birthday as a betting tactic, you can bet that he is a lucky charm in his own right. Pannullo reacted in one of the episodes that aired in October to the question of why he was using 2-2-1 as his wager by stating that February 21 is the birthday of the person he is in a relationship with. Both times he tried it, it was successful for him.

Even though Cris Pannullo appears to be in his 30s, he has not disclosed any information regarding his age or birthdate as of now. On the other hand, he noted that his girlfriend’s birthday is on February 21, and given that this date is exactly one week after Valentine’s Day, the two of them celebrate her birthday during Valentine’s week.

The viewers are not privy to any information regarding Cris’s early life or youth. The only piece of information available about him is that he used to be a professional poker player and is now an operations manager for customer success.

Although Jeopardy! is where many people first heard about him, this is not his first time appearing on television. According to the article that was published on Millionaire Fandom, he competed on Who Wants to Be a Millionaire? on October 23-24, 2018, and received $5,000 after failing to answer the $7,000 question correctly.

However, a lot of people who watch Jeopardy believe that he will end up taking home the grand prize because his performance on the game has been exceptional from the very beginning, and his winning run also appears to be continuing. 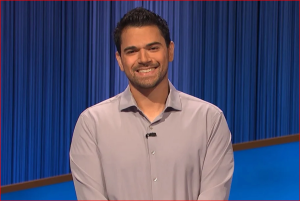 By prevailing in each of his last five Jeopardy matches without fail, Cris Pannullo has ensured himself a spot in the forthcoming tournament of champions. In addition to being a successful customer operations manager headquartered in Ocean City, New Jersey, viewers of the game show have expressed a strong preference for his gameplay.

According to the birth certificates that can be found online, Cris was born on July 30th, 1984, making his current age 38 years old. He is said to have earned a graduate degree from the University of New Jersey, which he attended, according to some accounts. Because Carmen Pannullo, Jacquelyn F. Pannullo, Catherine Pannullo, Sara Pannullo, and Rachel Pannullo are all connected to the same location, it is likely that they are relatives of his family.

In 2018, Cris Pannullo was also a contestant on the formerly popular game show “Who Wants to Be a Millionaire?”. On October 23rd, he was awarded $5,000 in cash, and on October 24th, he quit the show after failing to correctly answer a question involving $7,000. Chris Pannullo is a talented poker player who won the Jeopardy trivia game show in 2022 and currently is in the position of holding the streak tournament berth.

The resident of Ocean City made up his mind to participate in a television game show once more in the hopes of improving his chances of winning. This time, he made the decision to go on Jeopardy!, the Emmy Award–winning series with the longest running time. This is his 39th season, and he is the only player who has won 11 games so far.

During the course of an interview, Cris disclosed that his long-term girlfriend Heather was the one who suggested that he take part in the game show. She was a “great instructor, a wonderful partner, and a lovely human being,” according to Cris’s description of her. It would appear that she prepared him for the series of competitions.

Cris was a professional poker player in the past, in addition to his other accomplishments, including being a customer success operations manager and a smart guy. The host of Jeopardy!, Ken Jennings, believes that the contestant has utilised his poker talents fairly effectively throughout the competition. At one point, Ken made a comparison between Cris and a player from 2019 named James Holzhauer, who had a record of 32 wins and $2.46 million in earnings. 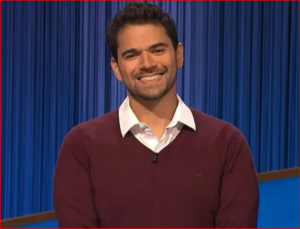 Jeopardy is a popular television game show that Cristofer enjoys watching and, when he gets the chance, competes in. This hope that he will go at least once is not completely unrealistic. After some time had passed, he applied to be a contestant on the television show Jeopardy and went through the audition process. Following his qualification, he began competing on television as a contestant.

On October 5, 2022, he participated in a round of Jeopardy on a television show alongside other players Tory Martin and Francis Gomes. Following his victory in the fourth game, which took place on October 6, 2022, he joined forces with fellow competitors Jo Austin, a retired IT project manager from Manlius, New York, and Jeff Parker, a professor of theatre from Colorado, to compete in the following round. In the Jeopardy game that was broadcast on the 7th of October 2022, he participated alongside other contestants Dan Feyer and Katt Matthews.

The game show Jeopardy claims that Cristofer is qualified to compete in the upcoming season of the Tournament of Champions. He won a total of $162,080, which was the winning award (for Six days). In reaction to the host Ken Jennings’s announcement that he will be competing further in the Tournament of Champions. “That’s incredible,” Cris Pannullo exclaimed, “and hopefully by then the flight prices will be a little bit cheaper.” Pannullo received reassurance from Jennings that he will be transported by air by the show. 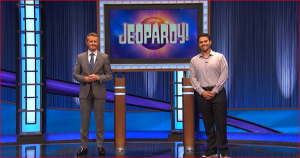 Cris Pannullo, who lives in Ocean City, is having a fantastic run right now. He has racked up overall winnings of more than $300,000 and is getting close to reaching the double-digit mark for Jeopardy victories.

On Wednesday, he won a large sum betting on the Daily Doubles, despite the fact that he did not go all-in like he had done on the nights leading up to that point.

However, despite his somewhat moderate wagers, he was still successful in hitting the numbers, as was evidenced by his spot-on replies.

He began the competition with a total winnings of $275,502 after the first eight days of play. In addition, on Wednesday, the sum was increased to $313,323 for a total of nine games.

The host of Jeopardy, Ken Jennings, remarked that “He’s on quite a roll.”

Pannullo, who works as a customer success operations manager, greeted everyone in the room with his characteristic “thumbs-up” sign at the beginning of the event.

His advantage continued to grow throughout the show in comparison to his underdog competitors.

On a handful of occasions, though, Pannullo, who is typically calm and collected, showed signs of plainly dissatisfied expressions after either missing a question or hitting the buzzer too late to provide an answer.

However, he maintained his dominant position throughout all of the rounds. And with each of his Daily Doubles questions that he answered correctly, his lead got even wider.

Jennings made a mental note of Pannullo’s impressive performance in the closing minutes of the game.

Regarding Pannullo’s performance, Jennings remarked that it was “another dominant performance as we approach into Final Jeopardy.”

Once the contestants received access to the last piece of information, it was irrelevant whether or not any of them provided the proper response. Pannullo already had $29,600, giving him an unassailable lead in the competition.

Challengers A student from Lima, New York named Elizabeth Meisenzahl had $8,600, and a graduate student from Pasadena, California named Fernando Villafuerte had $5,000.

According to Jennings, “huge payoff” is an accurate description of what happened to Pannullo in the end.

This coming Thursday, October 13, at 7 p.m., you may catch Pannullo on Jeopardy! on Channel 6.

Zack Russell, a contracting officer from Dayton, Ohio, and Andrew Jiang, an options trader from Brooklyn, New York, will be the opponents that the reigning champion will have to face. Additionally, he will compete in the Tournament of Champions during the next year.