Christian Walker (born September 30, 1999) is a conservative internet personality from the United States.

Walker sees himself as a Christian “conservative populist” and a “free-speech radical.” Walker has also been vocal about his support for Trump. Walker believes that black people are “more racist” than white people, and he favours the construction of a border wall between the US and Mexico. Walker filmed a protest to President Joe Biden about rising petrol prices and shared it with his many Instagram followers, resulting in a video that went viral. 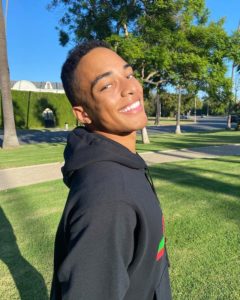 Walker had over 390,000 Instagram followers as of June 2021. By recording political commentary videos in a Starbucks drive-through, he garnered over 400,000 TikTok followers. In February 2021, Walker was permanently removed off the latter platform.

“UCLA’s Dean of Students is aware of remarks in which a student uses harmful language on social media,” the official UCLA Twitter account said in December 2020. This was commonly interpreted as a response to the Dean’s repeated correspondence regarding Walker’s internet statements. Walker later claimed UCLA was harassing him for refusing to “slide into [their] communistic, totalitarian ideas” in a video.

Walker is the son of former NFL player Herschel Walker and is openly gay.

Walker is a transfer student from Southern Methodist University to the University of California, Los Angeles. Walker competed in competitive cheerleading in high school.

Walker describes himself as a “free-speech radicalist” and a Christian “conservative populist,” according to his own words. He has stated that “illegals” do not belong here and that white supremacy is a liberal fiction developed on college campuses, among other things. Walker has distinguished himself among the internet’s underbelly of young conservatives, such as @thelibertyladies and @therepublicanhypehouse, becoming a household “Young Republican” within the Gen-Z demographic and even appearing on Fox and One America News. (It also doesn’t helped that his father is Trump’s close friend.) Walker, a gay Black man in Cartier and Gucci who also happens to be a two-time world-champion competitive cheerleader with a six-pack and nicely groomed eyebrows, stands out in a sea of white and blonde. “I laser my entire body,” Walker says, a grin on his face.

Walker’s videos could be interpreted as performance art, parody, or simply the inevitable result of a privileged life. Walker, on the other hand, sees himself as a breath of fresh air. “I think conservatism has been incredibly buttoned-up, uninteresting, and stuffy for a long time,” he says. “We also need conservatives who are culturally aware.” Let’s make some TikToks, shall we? Let’s meet at Starbucks to discuss politics. Because that is exactly what [the left] does, and they are extremely good at it. “We were in desperate need of a little sass.”

Last summer, Walker gained prominence after recording a video criticising Joe Biden’s remark to Charlamagne tha God that Black folks “ain’t Black” if they planned to vote for Trump. “Black America has been fighting preconceptions that we all have to talk a certain way, that we all have to act a certain way,” Walker screamed into his iPhone camera before asking Biden, “Who are you to determine Blackness?” Because you’re an old white liberal, you don’t get a pass for racism.” Walker’s subsequent posts clarified things if that comment didn’t read too differently from how some progressives responded at the time. Walker released videos defending Atlanta cops who killed Rayshard Brooks when protesters took to the streets in favour of Black lives this summer. “The coronavirus shut down the entire planet, and then ghetto BLM launched terrorist strikes across our country.” “That’s when I got involved in politics,” he says.

Walker was soon responding to practically every news event with liberal-taunting speeches, which he frequently taped at his favourite coffee shop, Starbucks. In a signature Christian Walker video, he holds court on right-wing politics and complains about baristas messing up his order (a three-shot espresso over ice with one pump of white mocha, one pump of vanilla, whipped cream, and extra ice in a Venti cup — and ice water on the side) at the chain’s drive-through. His Starbucks cup rests alongside him while he looks over Zoom. “I’ve been drinking Starbucks since I was 6 years old,” he recalls, “and I used to go every day before it was a white Karen thing.” 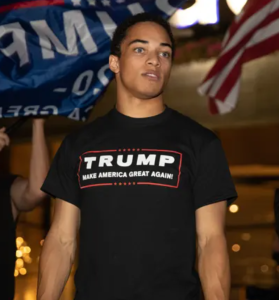 What does Christian Walker think about certain things?

Walker is a big fan of former President Donald Trump, and he says so.

Los Angeles Blade says that in 2020, Walker led a Gays for Trump March in West Hollywood, California, where he was seen with a bullhorn getting the crowd excited.

In the past, he has also been in favor of building a wall along the border between the United States and Mexico.

In January 2021, he tweeted, “Biden stops building the wall that protects Americans just as they finish building his new walls in D.C.”

Also Read: Who Is Chante Moore&#8217;s Husband Stephen Hill BET? His Age and Net Worth

What has Christian Walker said about how he feels about being gay?

“Since it’s the start of Pride Month, I’d like to tell everyone that I’m NOT gay. I like men, but I don’t want to be part of the rainbow cult “He put words on paper.

“I don’t believe in indoctrinating children. My sexuality is not all of who I am. And I don’t go to gay bars. Don’t say that I’m gay.”

How many people follow Walker on a social media site?

But the 22-year-old is known for his rant-like TikToks and has over 132k followers on the social media site.

Walker also has a podcast called UNCANCELABLE. He calls it a “anti-woke podcast.”

Up until now, Christian Walker has been a strong supporter of his father, Herschel Walker, who is running for the Republican Senate nomination in Georgia.

After a report in The Daily Beast on Monday said that Herschel Walker once paid a woman to have an abortion, his 23-year-old son Christian, who wants to be a right-wing social media star, went on Twitter to say that his dad was an absentee dad and always lied. 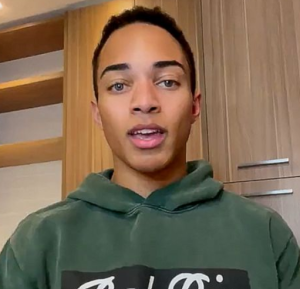 “Everyone in Herschel Walker’s family told him not to run for office because we all knew (some of) what he had done in the past. Each and every one, “After the Daily Beast’s story came out, Christian sent out a tweet. “He gave us the middle finger and decided to air all of his dirty laundry in public while lying about it. I’m done.”

In a statement about the Daily Beast story, Herschel said, “I’m done with this.” He also said he planned to sue the newspaper for the “defamatory lie.”

“I’ve never suggested that anyone have an abortion. It’s not true that I paid for an abortion. I am going to keep fighting, “On Hannity, Herschel said.

Here are some more details about Christian Walker and the recent things he said about his father.

Christian has become well-known for his outspoken pro-MAGA videos. In his Twitter bio, he calls himself a “free-speech radicalist,” which is how he became known. In some videos, he says that the 2020 presidential election was stolen, just like former President Donald Trump.

Christian is an openly gay Trump supporter who led a march of gay people for Trump in West Hollywood in 2020.

Christian has also been on Fox News, and he hosts a show called Uncancellable that he calls a “anti-woke podcast” that is about entertainment.

A former football player with a controversial past and a son who is popular on Instagram is running for the GOP Senate in Georgia.

He used to be the best cheerleader in the world

Herschel was proud of his son, who was 16 at the time, when he won a cheerleading World Championship in 2016.

Christian and the Spirit of Texas Royalty Co-Ed Cheer Squad won the 2016 World Championship of All Star Cheerleading at Walt Disney World. Herschel told TMZ, “I was so happy about it because there was a lot of good competition there, but I’ll tell you what, they did it!”

After going to college in California, he said in July that he was moving to Florida and that he supported Republican Governor Ron DeSantis.

He helped his father’s campaign in the past.

When the football legend first said he was running for president in August 2021, it seemed like Christian and Herschel were close. At the time, Christian wrote on Twitter, “MY DAD IS RUNNING FOR SENATE,” to let people know that his dad was running for office.

In December 2021, he gave a speech at Trump’s Palm Beach, Florida, estate, Mar-a-Lago, where he talked about his father.

In the wake of an explosive report, he was very angry with his father.

On Monday, it looked like the relationship between the father and son was coming to an end. Christian took to Twitter after a story in The Daily Beast about the alleged abortion, which Herschel has denied.

“My mom and I would really appreciate it if my father Herschel Walker stopped lying and making fun of us,” Christian wrote. “You’re not a ‘family man’ when you left us to sleep with a bunch of women, threatened to kill us, and made us move 6 times in 6 months to get away from your violence.”

He kept going: “I don’t care about someone with a bad past who owns up to what they did wrong. But how DARE YOU LIE and act like you’re a “good, moral, Christian man”! You have spent your whole life RUINING the lives of other people. How dare you.”

Herschel, on the other hand, wrote in response to one of Christian’s tweets: “I LOVE my son no matter what.”

But by Tuesday morning, Christian was still talking about how he felt about his dad. He posted two more videos in which he called Herschel out for lying.

“I stayed quiet while the horrible things my mom went through were minimized,” Christian said in one video. He was referring to his mother Cindy DeAngelis Grossman’s claims that Herschel was violent during their marriage, including putting a gun to her head (episodes that Walker has not denied, saying he had blackouts and memory loss).

Herschel Walker wants to be in the Senate, and he says that every child needs a father. However, he isn’t close to his 10-year-old son.

Christian kept going: “I didn’t say anything when I heard that my father, Herschel Walker, had a bunch of kids all over the country that he didn’t raise. And you know what my favorite thing to talk about when his father isn’t there is? Surprise! Because I cared about it.”

Christian pointed out that Herschel recently released a statement confirming that he has three sons and an adult daughter. This was done after The Daily Beast found a paternity suit from 2014 that allegedly proved that the candidate fathered a 10-year-old boy he did not raise. Then they saw two more children.

Read More: Is Carlo Marks Still In A Relationship With Girlfriend Shivani Ruparelia? His Children and Family