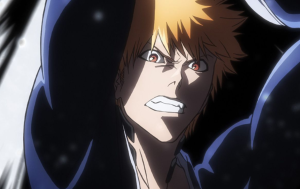 People who are monitoring the movement of hollows at the Soul Society Department of Research and Development have seen a significant increase in the rate at which hollows are being destroyed. It points to the potentially disastrous possibility that the lines dividing the world of the living and the soul society would start to merge in a matter of days. Officers Ryunosuke and Shino from Squad 13 have been tasked with keeping an eye on the situation in Karakura town, but they are unaware of this development.

The former seems to be tormented by the idea that they may have to fight Hollows there, but the latter is confident and fearless in their approach to the situation. Unfortunately, his worst worries came true very quickly, and to make matters even worse, Shino was knocked out easy by one of the adversaries. Ryunosuke is unable to defend himself as well and is on the verge of being killed until Ichigo, Orihime, Sado, and Ishida not only easily vanquish the hollows but also assist the two in recovering from their wounds. Ryunosuke’s life is saved at this point.

Later on, Ryunosuke and Shino wake up in Ichigo’s room; however, just as they are about to begin discussing the incident that brought them together, a man unexpectedly enters the room through the window. Ichigo is quick to respond, and he sends him outside the dojo. In spite of the fact that he initially thinks the other person is an Arrancar, he quickly finds out that he is up against a Quincy by the name of Asguiaro Ebern.

During this time, Squad 11 is conducting an investigation of the Rukon District and has discovered that its residents have vanished without a trace. In the town of Karakura, Ebern maintains his mockery of Ichigo by demanding that the latter produce his Bankai and wield it against him. Ichigo eventually leaves the substitute Soul Reaper speechless by his astounding skills, despite the fact that the original Soul Reaper is convinced that he can defeat him. Unfortuitously, just as he was ready to question him, Ebern was able to get away.

Bleach: Thousand-Year Blood War Episode 1 Ending: What is the Wandenreich?

While the strange occurrences are taking place all around Japan, Shigekuni Yamamoto-Genryuusai, the captain of the first division of Soul Society’s principal military arm, is sitting in his office unaware of most of the happenings. Suddenly, six people in masks appear where he is, and they are said to have killed one of his men while he is preoccupied with his own thoughts. They assert that they are from the Wandenreich and declare war on the Soul Society, stating that the latter would be wiped out in the coming days. Despite the fact that the men in masks don’t provide much of an explanation, Wandenreich is actually a covert empire belonging to the Quincy that has designs on destroying the spirit realm.

After suffering defeat at the hands of the Shinigami roughly a thousand years ago, the Quincy were compelled to depart the human realm and begin a new life elsewhere. They ultimately found their way to the Seireitei, which they considered to be a location that offered a more secure environment for them to reorganize in. Using the abundant Reishi, they established their covert empire (Wandenreich) and waited to amass sufficient power to conquer the world while simultaneously obliterating the Soul Society. All the while, they did this, they were able to remain undetected. The Quincy have waited for generations to achieve their warped ambitions, and the declaration of war is the first step towards accomplishing those goals.

Who Leads Six Masked Members of the Wandenreich to Confront Shigekuni Yamamoto And Declare War on Soul Society?

When the six unknown guys entered the workplace of Shigekuni Yamamoto-Genryuusai, they were headed by a man who took charge of the conversation and spoke for the entire group. Not only did he make fun of the captain’s relaxed attitude toward security procedures, but he also cautioned Yamamoto that the Soul Society will not survive for more than five days. The masked leader continued to speak to Yamamoto while he was in the process of murdering one of Yamamoto’s men right in front of him. He then told Yamamoto that the people that make up Soul Society will meet the same end.

Even though he does not make any sort of introduction to the captain, it is eventually found out that he is in fact an Arrancar by the name of Luders Friegen. In spite of the fact that he holds the emperor of Wandenreich in high regard, he treats his fellow countrymen in a condescending manner and gives off the impression that he sees himself as being above them. Sadly, the consequences of his mindset become apparent to him quite quickly. 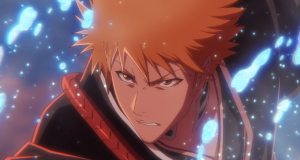 Who is the Mysterious Man That Cuts Off Luders Friegen’s Hand? Is He the Emperor of Wandenreich?

Asguiaro Ebern reunites with the other members of the Wandenreich after he breaks free of Ichigo’s grasp and is able to flee. When Luders Friegen, along with some other masked men, also arrives there, he sees Ebern bowing, and he lauds the act as being worthy of praise. Ebern, on the other hand, is keen to point out that he would never prostrate himself in front of someone like him. Luders’ right arm is severed, and it falls to the ground before he can completely realize what is occurring.

As it turns out, Asguiaro Ebern is actually bowing before a furious guy who is seated on a throne. This man tells Luders that he despises war and asks him for his report on the recent developments in the situation. It comes out that the mysterious man is none other than Yhwach, who is affectionately known by his subordinates as Father of the Quincy. Although the episode ends there and does not offer much clarification on his identity, it turns out that the strange man is Yhwach. He is the current Emperor of the Wandenreich as well as the son of the Soul King. He has held both of these titles simultaneously.

Daniel Olson: Found or Missing? Is He Dead or Alive?