Romain Gavras is the director of the French-language movie “Athena,” which was produced by Netflix and is on the council estate with the same name in Paris. The plot of the dramatic film focuses on three brothers named Abdel, Mokhtar, and Karim who each react in their own unique way to the passing of their younger brother, Idir. Their ideological differences result in a difficult family drama that takes place within the context of a civil war that is taking place on the Athena estate.Through the animosity that exists between the brothers, the film delves into topics such as anarchy, violence, and the harshness of the police. As a result, considering the socio-political underpinnings of the story, audiences are likely to be curious about whether or not the movie is based on actual events. In that scenario, the following will provide all the information that you require concerning the ideas that led to the creation of “Athena.”

Netflix’s Athena Based on a True Story

Is Athena a True Story?

Athena is not based on a real-life event, contrary to popular belief. The screenplay for the movie was penned by Elias Belkeddar, Romain Gavras, and Ladj Ly, and it served as the basis for the film. The events of the story take place in the council estate known as Athena, which is located in Paris. The struggle in this premise revolves around Karim, a rebel commander, and Abdel, a decorated soldier. Both Karim and Abdel are looking for answers regarding their brother Idir’s death, which appears to have been caused by police officials. The writers have created a fictional account of the brothers and their efforts to seek retribution in the world.

Gavras disclosed in the same interview that the titular council estate in the film is not based on an actual area in the city of Paris. Instead, the manor house is a work of fiction, and the name alludes to the fact that the movie is inspired by Greek tragedies as well as to Athena, the Greek goddess of protection and strategy. The director of the movie indicated that as they were developing the plot, they concentrated on an incident that could spark a movement across the entire country. The same is demonstrated in the movie through the passing of Idir, a young man who passes away while in the custody of the police. The event, on the other hand, is not based on any particular incident that occurred in real life. Instead, the story of Idir’s death and the reaction of his brothers is based on a combination of various real-life situations that served as loose inspiration.

In the end, the film “Athena” is not founded on any actual events or people. It is a work of fiction that examines ideological divides brought on by civil war through the lens of the family unit, and it was influenced by the conventions of Greek tragedy. The film also offers a profound social commentary on modern society and the fragility of its state of affairs. The conflicts and acts of violence that take place on the fictitious Athena council estate are meant to be symbolic of the myriad problems that exist in the real world. The breathtaking visual aesthetic and portrayal of dread, anarchy, and persecution contribute to the captivating story’s ability to keep the audience’s attention. The plot, on the other hand, stays grounded in reality thanks to its topics and the compelling family drama that it features, which enables viewers to connect with the topic on an emotional level.

Romain Gavras is the director of the French tragedy film Athena, which will be released in 2022. Dali Benssalah, Sami Slimane, Anthony Bajon, Ouassini Embarek, and Alexis Manenti are among the actors that have been tapped for roles in this production.

The movie made its debut at the 79th Venice International Film Festival, where it also participated in the competition for the Golden Lion award.

The story takes place in a French banlieu and focuses on the struggle of the deceased person’s brothers, Karim, Moktar, and Abdel. The tale involves the mayhem that erupts in a neighborhood known as Athena as a result of the violent execution of Idir and is set in that neighborhood. 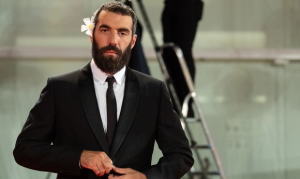 Romain Gavras is the director of the French tragedy film Athena

Jérôme is played by Anthony Bajon.

Iconoclast and Lyly are responsible for producing the movie. It was filmed in the year 2021 in the town of Évry-Courcouronnes, which is located in the suburb of Paris. There is conversation in both French and Arabic throughout it.

The 79th Venice International Film Festival was the venue for the first public screening of the movie. It will first be shown in “select” theaters on September 9, 2022, followed by a release on Netflix’s streaming service on September 23, 2022. Netflix will be the film’s distributor.

On the website that aggregates reviews, Rotten Tomatoes, eighty percent of the fifteen critics’ reviews are good, with a rating of seven out of ten as the average score. The film received a score of 76 out of a possible 100 on the review aggregating website Metacritic, which uses a weighted average to determine scores. This number represents “generally good reviews.”

The movie was described by David Rooney of The Hollywood Reporter as “nerve-rattling, intense, and explosive.” He also called the movie “a live grenade, beginning in full ignition mode and ramping up its intensity throughout with virtuoso technique.”

The writer Todd McCarthy of Deadline Hollywood referred to the movie as “a torrent, an inundation, a cascade of anger, fury, and frustration over the realities of life for a particular group of French families.” He also said that the movie “grabs you by the throat and barely allows you a moment for a gasp of air.”

The film received a grade of C+ from David Ehrlich of IndieWire, who described it as “simply a pretty cool movie about a country that’s ready to catch fire” and said that it “would have been more horrifying and successful had it truly embraced the courage of [the anger of the dispossessed].”

Athena “works better as a boisterous, immersive action extravaganza than as a thought-provoking political thriller,” according to Tim Grierson of ScreenDaily.

The film was given a rating of three out of five stars by Peter Bradshaw of The Guardian. He stated that the film was highlighted by “a stunning opening,” but that it also lost “its dramatic form” afterwards.

Read more: Molly Dattilo’s Death: How Did She Die? Was She Killed?

Who Plays Leanne in A Jazzman’s Blues? What is Solea Pfeiffer’s Ethnicty?