In today’s current world, where everyone wants to stand out and be noticed, they will do anything and all they can to achieve that goal. People, mainly girls, sometimes damage their bodies while doing the same thing. You’ve probably heard about cute body parts, and every female has something unique to attract attention, from lips to butts, and today we’re talking about Anastasia Pokreshchuk, the girl with the world’s largest cheeks. 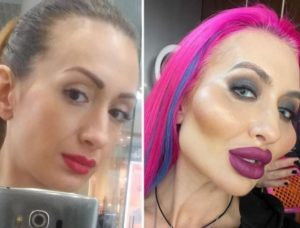 So, we’re talking about Anastasia Pokreshchuk, a well-known Instagram model who made news recently after claiming to have the “world’s biggest cheeks.” She’s only recently started making news, and her latest cosmetic implants surprised the internet. Everyone who saw her photos was stunned to see her, but not everyone appreciated her because some people claim she does not look as nice as she should or as she imagined she should look. She is trying something even more spectacular to grace her looks now that she has gained an audience and the attention of the world, yet if you look back at the prior images that she took before getting her cheeks implant done, you will be able to see if the girl did well or not.

“My mother thinks I was naturally attractive before, but now she says I appear more exotic,” she said in a statement. “My friends think my new look is better because I used to look like a grey mouse,” she added. “I adore them, I want them to look like this, and I’m extremely delighted,” the model says of her appearance. On a regular basis, I inject other parts of my face.” “I was ashamed of everything; my voice, my appearance,” the youngster wrote in another declaration, seemingly expressing her pain. It took a lot of effort. She said, “I suppose I was ugly before.”

Now, the model has taken her looks to the next level by revealing her most current or should we say most recent photos in which she flexed her cheeks and told her fans how she is feeling after getting the implant. As the anesthetist (a person with the medical knowledge essential to administer an anesthetic to patients) injects the liquid into her lower jaw, just below her sculpted cheekbones, she records herself wince in pain. 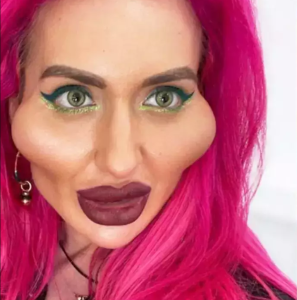 According to The Sun, the model, who is now 39 years old, got her first facial injections when she was just 26 years old. Since then, she has “lost track of how many cosmetic treatments she has had.” Anastasia’s face was more narrow when she was in her 20s, but she now brags about having the “largest cheeks in the world.”

During this time span, Anastasia has invested roughly £ 1,500 (or approximately Rs 1,52,130) in various cosmetic procedures and fillers. She has had Botox injected into her forehead, fillers placed in her lips and cheeks, and the corners of her mouth straightened. Additionally, her jaw and chin have been altered.

“I adore them, I wish for them to appear exactly like this, and I am overjoyed.” She went on to say, “I inject other regions of my face on a regular basis myself.”

Who Is Anastasia Pokreshchuk’s Husband, Boyfriend?

Anastasia Pokreshchuk is one of the most popular models on Instagram. She was just included in the press because Anastasia claimed that she had the largest cheeks in the world. When she showed off her most recent cosmetic implants, she sent shockwaves through the internet community. Anastasia currently has 33 years under her belt and she was born in Kiev, which is located in Ukraine. Anastasia’s appearance changed significantly when she was in her 20s. She had a more angular face and her hair was wavy. Anastasia’s path toward becoming the new her began approximately six years ago. As a result, she now has full cheeks. Photos of Anastasia Pokreschuk both before and after her surgery are available here. 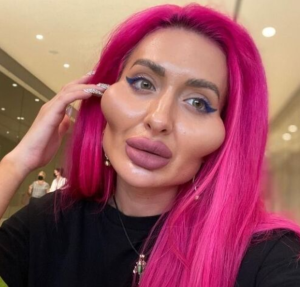 The Female With the Fullest Cheekbones

Anastasia has cheeks that are larger than anyone else’s in the entire planet. At the age of 26, she underwent her very first face filler procedure, which marked the beginning of her transformation journey to have large cheeks. Anastasia has shelled out more than $2,000, which is equivalent to around Rs. 1,45,530, only for cheek fillers. She had Botox injected into her forehead, fillers placed in her cheeks, lips, and the corners of her mouth, and both her chin and jaw were remodelled. Anastasia Pokreshchuk has had needles inserted through a variety of bodily parts, including her teeth, in the past.

Anastasia Pokreshchuk Before And After

Anastasia’s cheeks have been augmented by a number of filler injections, which has led to their current pronounced fullness. Her tresses currently sport a rosy hue thanks to a recent dye job. Her jaw, chin, and lips have all been altered over the course of her lifetime. Anastasia had mentioned earlier, before going to get the fillers, that she was really hesitant to publish images of herself online.

She stated that she felt ashamed of everything, including her voice and her appearance. It required a great deal of effort. I assume I had uglier days in the past.”

It would indicate that Anastasia is delighted and content with how she has evolved. She remarked, “My mother thinks I was naturally attractive before, but now she says I appear more exotic, and my friends think my new look is better because I used to look like a grey mouse.” My mother used to think that I was inherently lovely. The model has no complaints about her physical appearance. She expressed her feelings by stating, “I adore them, I want them to look like this, and I am really delighted.” When it comes to other parts of my face, I frequently have injections.

Anastasia Pokreshchuk was a natural beauty when she was 26 years old. She had long brown hair and wore very little makeup.

However, she has spent the past six years radically altering the way that she looks by undergoing extensive plastic surgery and spending a significant amount of money on the process in an effort to get a more distinctive appearance.

She claims that she now has the “largest cheeks in the world,” and she maintains that she has lost track of how many different procedures she has had done in total.

The Ukrainian beauty, who is now 32 years old, has astonished her admirers on social media by uploading a flashback snapshot of her appearance before plastic surgery. In the photo, she can hardly be recognised.

She has even requested that her supporters choose which of her looks they like most.

A man was called filthy for sharing a recipe for spaghetti bolognese that “you would give to a dog.”

As they transition to a new website, the new logo features Meghan Markle and Prince Harry doing a “swipe” at other royals.
In the picture, she can be seen posing with dark brown hair and eyes, a minimal amount of makeup, and no obviously augmented facial features.

Her lips have also become fuller over the course of her lifetime.

Anastasia took to Instagram to gauge the preference of her 250,000 followers regarding her transformation, even though it is obvious that she favours her current image more.

Sign up for our newsletter and have the most important headlines delivered to your inbox each morning.

The Mirror’s newsletter provides you with the most recent news, as well as interesting showbiz and television stories, up-to-date sporting information, and crucial political details.

Emails containing the newsletter are sent out at the crack of dawn, midday, and nighttime on a daily basis.

By signing up for our email on this page, you will never miss a minute.

The post has received more than 21,000 likes and over 1,600 comments as of this moment, indicating that her fans are conflicted about the topic.

With her new appearance, one of Anastasia’s fans said that she looked “like a superhero from Marvel.” To this compliment, Anastasia responded “yeah” with a love heart emoji, indicating that she appreciated it.

Another follower mentioned that she was “quite lovely” at the age of 26, to which Anastasia simply replied, “No.” The comment was written in Ukrainian.

At the age of 26, when the throwback photo was taken, the model underwent her first face filler procedure, which marked the beginning of her makeover.

In addition to that, she changed the colour of her hair and lips and had Botox injected into her forehead.

The Ukrainian blogger known as Anastasia Pokrishchuk does not have a husband. However, she is taken at this time. Yes. She divulged the identity of her boyfriend. On her Instagram account, she shared a photo in which she was seen making out with a male companion. She mentioned her partner in a post that she published. However, it appears that the position is no longer open.Anastasia Pokreshchuk Boyfriend Anastasia’s lover is blogger Alexey Mironenko. He enjoys the thrill of trying out new techniques in plastic surgery. The photographs clearly demonstrate that Alexey has altered the appearance of his lips by making them noticeably fuller. He is employed in the colour department.

In point of fact, Anastasia mentioned that she has been the target of vicious comments on social media due to the fact that she has had cosmetic surgery, but she doesn’t care. “I am aware that other people may find them strange looking, but that does not bother me in the least.”

Anastasia shared her perspective on the matter with Holly Willoughby and Phillip Schofield of This Morning in July of last year. She stated that despite the advice of her physician, she is not going to stop injecting herself.

1. Who has the Biggest Cheeks In The World?

Anastasia Pokreshchuk has the biggest cheeks in the world

3. What is Anastasia Pokreshchuk’s age?

4. Who is Anastasia Pokreshchuk’s boyfriend?

Anastasia’s lover is blogger Alexey Mironenko. He loves experimenting with plastic surgery. The pictures show that Alexey has changed the shape of his lips by significantly increasing them. He is working as a colorist

5. Did Anastasia Pokreshchuk have surgery?

Yes. Anastasia has spent more than $2,000, that is Rs. 1,45,530, on cheek fillers alone. She had fillers on her cheeks, lips, and corners of her mouth, botox on her forehead, and a reshaped chin and jaw.

6. Where was Anastasia born?

She was born in Kiev, Ukraine

What Did Carl Junior Hackathorn Do? Sentence & Prison Stay Update