Anastasia Higginbotham is a multi-award-winning novelist and illustrator who has written several groundbreaking books. 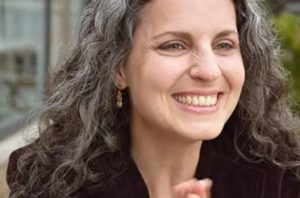 She is willing to speak on topics such as dismantling whiteness, making collages as a kind of healing and truth-telling, coping with grief and loss as a child, children’s literature and social change, professional development, as well as seminars for teachers and parents.

She tries to shed light on a topic that people typically avoid discussing because they know it will be controversial, and this is typically the case.

Anastasia Higginbotham is a writer, an artist, and an activist. She is the author of the Ordinary Terrible Things children’s book series, which is published by Dottir Press. Some of the titles in this series are as follows: Divorce Is the Worst, Death Is Stupid, Tell Me About Sex, Grandma, and Not My Idea: A Book About Whiteness.

Not My Idea is the first and only children’s picture book to make the connection between whiteness and racism. As a result, it gives white children and families the ability to recognize white supremacy and fight against it.

The fact that Higginbotham handcrafts her books on paper made from brown shopping bags and uses reused materials like jewelry and fabric is one of the things that sets her apart from other authors. The incredibly gifted lady instructs students in art, activism, and how to make meaning through collage out of whatever broken, unraveling, and ragged life conditions are seen in schools and libraries.

According to the information provided on her Linkedin profile, she earned her bachelor’s degree in East Asian Studies from Vanderbilt University in the year 1993 and graduated with honors. In terms of her professional background, she started working at the National Academy Foundation in the year 2000 and has been doing so continuously for the past 22 years.

In the interim, she worked with the Women’s Refugee Commission in 2016 as a freelancer and speechwriter for the organization for a period of four months. In addition, in the year 2017, she was accepted into the RIVER FUND and she also worked as a visiting author and instructor at the Brooklyn Friends School.

The story “What You Don’t Know” is about a liberated childhood that delves into queerness, blackness, and the power of love to destroy whiteness.

This is a story about coming to terms with the fact that you have always mattered and will continue to do so in the future. This is a book about the things that you won’t learn in school and the things that your church won’t tell you; yet, institutions are established by people, and people are always evolving.

A book that dives into the topic of living in touch with your own personal God, whatever you might name him, emptiness, and anything else that we can label and relate to our divinity and humility in the middle of what we don’t know.

When it comes to children and spirituality, things don’t always fall into the correct position, as is obvious. People’s reactions to the disturbing topic it touched on were complicated by the fact that they had a thousand different perspectives and another thousand different moral grounds set for their children. On the other hand, many individuals praised it highly and referred to it as a groundbreaking piece of work that was presented in the form of words.

Who Is Michael Aloni Spouse Moriya Lombroso? Age Gap And Children – Are They Married?

Gama Pehalwan Cause Of Death Is Still A Mystery: How Did The Legendary Wrestler Die?