Ajith Kumar, also known as Thala Ajit in Tamil cinema, was born on Ist Mai 1971 in Secunderabad (Andhra Pradesh) to father P. Subramaniam and mother Mohini. His family was middle-class and he started his career as an engine mechanic. After dropping out of school, he began working for a living doing small jobs. He finally chose acting to be his profession, and he started his career in 1990 with a small part in “En Veedu En Kanavar”. 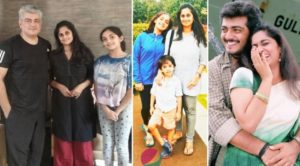 He was initially a supporting actor, but he rose to prominence in the Tamil film industry during the 1990’s. He was honored with numerous prestigious awards, including the Vijay Awards and Tamil Nadu State Film Award. Filmfare Award-South. He was married to Shalini, an actress, and had two children. This article will give you a detailed overview of Ajit Kumar family tree, including Shalini, his wife and their children, as well as Movies, Images, and other information.

As mentioned earlier in this article, Actor Ajith Kumar was born in 1971 from the parents P. Subramaniam & Smt. Mohini. In the initial phase of his career, he dated Heera Rajagopal but finally got married with actress Shalini.

This couple got blessed with a daughter Anoushka on 3rd January, 2008. They also blessed with a son Aadvik on 2nd March, 2015. Actor Richard Rishi is his brother-in-law and actress Shamili is his sister-in-law by relation.

Actress Shalini Ajith Kumar was born on 20th November, 1979 at Chennai, Tamil Nadu at the house of father Babu and mother Alice. She appeared as child artist in several movies and got fame as “Baby Shalini”. Shalini is also having a brother Richard Rishi and a sister Shamili and both are actors in South film industry. Actress Shalini got married with actor Ajith Kumar in year 2000 and blessed with daughter Anoushka and son Aadvik.

He was the son of Mr. P. Subramaniam (and his wife Mohini). He is a proud son of his parents. He is very fondly attached to his mother and father.

Ajith Kumar, actor, is the middle child of their parents. He also has brothers Anup Kumar & Anil Kumar.
He attended Asan Memorial Senior Secondary school for schooling, and he left the school in the tenth grade.
He quit education to become a mechanic in Enfield, after being recommended by a friend.
As a mechanic, he worked in several other places such as at garment shops and motorbike companies.
He finally found his way into acting with “En Veedu En Kanavar”, which featured a brief appearance. He was nominated for the Vijay Award as Best Actor for several movies, including Varalaru and Billa, Asal. He was also awarded the Tamil Nadu State Film Award Special Prize and the Tamil Nadu State Film Honourary Award.

For his films Vaali, Villain and Varalaru, he won the prestigious Filmfare Award South. Ajith Kumar, the actor, is also a professional race car driver and has participated in many global events such as the 2003 Formula Asia BMW Championship and 2010 Formula 2 Championship.

Ajith began his film career in 1992 at 21 when he was an actor in Prema Pustagam, a Telugu movie. Amaravathi, his next Tamil film, was a huge success. Pavithra’s second Tamil film was delayed 17 months due to a racing injury which left him bedridden. Both films were praised by the Tamil audience. His third Tamil film, Aasai was released in 1995. It was directed by Vasanth, and produced by Mani Rajnam. This helped him establish his acting career in Kollywood.

Ajith’s first big budget venture was Aasai. However, it wasn’t until Agathiyan and especially Kadhal Kottai’s blockbuster Vaanmathi that he was recognized as an actor in Kollywood. Ajith was later the lead in Amitabh Bachchan’s Tamil debut production Ullasam. He was paid a salary in excess of Rs. For the first time, he was paid a salary of over Rs.

Fatima Whitbread Birth Parents – Where Were They From? Their Ethnicity Revealed